The Fallen Officers Will Host
The First Annual Co-Ed Flag Football"
Tournament Called “The Blue Bowl”
November 3, 2018
to benefit the family of Fallen 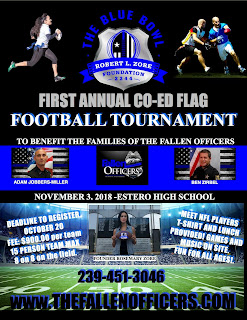 Officer Adam Jobbers-Miller was killed in the line of duty July 28, 2018 after fighting for his life for almost a week resulting from a gun shot to the head while doing his job trying to apprehend a fleeing suspect. This has effected so many lives and of course the family of Adam Jobbers- Miller. Officer Ben Zirbel was killed on patrol August 22, 2019.The Fallen Officers which supports the Robert L Zore Foundation knew we had to do something and that is why we have created “The Blue Bowl” to not only raise money for the family of the Fallen Officer but to remember Adam Jobbers-Miller and his life and his duty to not only his family but the community he served.

About The Fallen Officers and The Robert L. Zore Foundation"
Rosemary Zore was only 7 years old when she lost her father Robert L. Zore a
Miami Police Officer on Christmas Eve 1983. Rosemary always wanted to do
something to not only honor her late father but to also help other children all over the country that have also lost a loved one in the line of duty. Our mission is to provide support to the children of the fallen, honor the sacrifice of our Hero's. Strengthen local leaders to help eliminate racial disparities and to heal racial divisions while promoting respect in Law Enforcement."