Naples, Fla. (April 13, 2018) - Sales of homes above $1 million in Naples during the first quarter of 2018 drove the market. Their sales increased 61 percent compared to the same quarter of 2017 according to the First Quarter 2018 Market Report released by the Naples Area Board of REALTORS® (NABOR®), which tracks home listings and sales within Collier County (excluding Marco Island).
"January's results led some to question expectations for the year when compared to last, yet in February the market gained its stride which accelerated in March with closed sales shooting ahead to end the first quarter on a very impressive note," said Budge Huskey, President, Premier Sotheby's International Realty. According to NABOR's monthly reports, January had 672 closed sales, February reported 672 closed sales, but March kept agents very busy with 942 closed sales, driven by a strong high end which included a number of new construction condominiums just delivered.

Pending sales in the first quarter of 2018 increased 3 percent to 3,177 compared to 3,097 in the first quarter of 2017. Although pending sales for both single-family homes and condominiums over $1 million increased by double digits, it was the $2 million and above condominium market that raised eyebrows among brokers who reviewed the reports.
"Tourism was up in our area this season compared to last year so it is not surprising that we would end with strong pending sales for the quarter," said Kathy Zorn, President/Owner, Better Homes and Gardens Real Estate Pristine. "But I wasn't expecting to see a 109 percent increase during the quarter in pending sales for condominiums over $2 million!"
"There are very good investment opportunities in the condominium market, especially at both ends of the market," added Coco Amar, a managing broker at John R. Wood Properties. "The top and bottom price categories are where both the inventory has grown and the prices have dropped."
As reflected in the market's year-ending statistics (12-months ending 1Q 2018 versus 12-months ending 1Q 2017), there was a 69 percent increase in closed sales of condominiums in the $2 million and above market, and a 17 percent decrease in its median closed price to $2,450,000 from $2,962,000 in 2017. Despite rocket sales in this high-end sector during the first quarter of 2018 (179 percent increase) and a drop in median closed prices for the first quarter (24 percent decrease), its inventory increased 5 percent! Similarly, median closed prices for condominiums in the $300,000 and below price category dropped 1 percent to $199,000 from $200,000 in the first quarter of 2017, but inventory increased 3 percent.
The NABOR® First Quarter 2018 Market Report provides comparisons of single-family home and condominium sales (via the Southwest Florida MLS), price ranges, and geographic segmentation and includes an overall market summary. The NABOR® First Quarter 2018 sales statistics are presented in chart format, including these overall (single-family and condominium) findings:
Broker experts analyzing the reports said most counties in Florida continue to see inventories decline, but the Naples area experienced a steady rise over the past few months. In fact, according to Jeff Jones, Managing Broker for Engel & Völkers Naples and Bonita Springs offices, there is currently 8.25 months of inventory available in Collier County. Months of inventory is a nationally accepted measurement of how fast all existing homes on the market would last assuming no additional listings are added and sales activity continues to remain the same as the previous 12 months of sales.
"There were 118 closed sales of condominiums between $1.4 million and just over $2 million in a new development located in North Naples during the last two months that impacted our median closed price statistics," said Wes Kunkle, President and Managing Broker at Kunkle International Realty. These "one-day-on-the-market" closed sales are one reason why the report showed a 13 percent increase in the median closed price for condominiums in the $1 to $2 million price category and a 24 percent decrease in median closed prices for condominiums in the $2 million and above price category.
Kunkle, along with several brokers who reviewed the reports, is concerned sellers may misinterpret this statistical anomaly as a reflection of the area's comparable pricing activity. "These sales were for new luxury condos that were secured over a two year period. When the project obtained its final Certificate of Occupancy, the closings were finalized and they all appeared as a one-day sale in the MLS."
However, this was not the only new construction activity that influenced NABOR®'s first quarter statistics. According to Jones, many sellers of speculative single-family homes that have been on the market for over two years in neighborhoods like Park Shore and the Moorings began to set more realistic list prices this past quarter, which resulted in more sales in the high-end, single-family home market.
"Overpriced homes don't sell," said Jones. "In fact, I think sales during January and February could have been better had many of these sellers set their prices realistically earlier. It wasn't until March that I began to see an uptick in price decreases in the MLS for many of these speculative homes, and then those sellers saw multiple offers from buyers who had been holding out."
As always feel free to contact me with any questions you may have.
Michelle

The Naples Area Board of REALTORS® (NABOR®) is an established organization (Chartered in 1949) whose members have a positive and progressive impact on the Naples Community. NABOR® is a local board of REALTORS® and real estate professionals with a legacy of nearly 60 years serving 6,000 plus members. NABOR® is a member of the Florida Realtors and the National Association of REALTORS®, which is the largest association in the United States with more than 1.3 million members and over 1,400 local board of REALTORS® nationwide. NABOR® is structured to provide programs and services to its membership through various committees and the NABOR® Board of Directors, all of whose members are non-paid volunteers.
The term REALTOR® is a registered collective membership mark which identifies a real estate professional who is a member of the National Association of REALTORS® and who subscribe to its strict Code of Ethics.

Posted by Michelle DeNomme, Your South West Florida Realtor at 9:23 AM No comments:

A prospective buyer wants to transform the site of what was an iconic Naples restaurant into a commercial complex with three stories of above-ground parking.
The Brookline Cos., based in Clearwater, would tear down the old St. George and the Dragon restaurant building near Fifth Avenue South and 10th Street South.
The popular steakhouse, known for its dim lights and wood-paneled walls, operated for more than 40 years before it closed in 2012.
In its place, Brookline is planning a three-story project with 51,000 square feet of commercial space, including 22,100 square feet of ground-floor retail space and a parking garage with 242 spots. The parking would be open to the public.
Bill Yeomans Jr., Brookline’s manager, declined to disclose any potential retail tenants or other possible uses of the commercial space.
“It’s still too early,” he said.
Read more at NaplesDailyNews.com 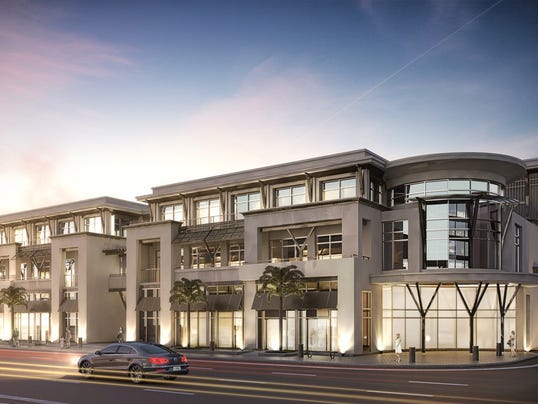 Posted by Michelle DeNomme, Your South West Florida Realtor at 1:13 PM No comments: