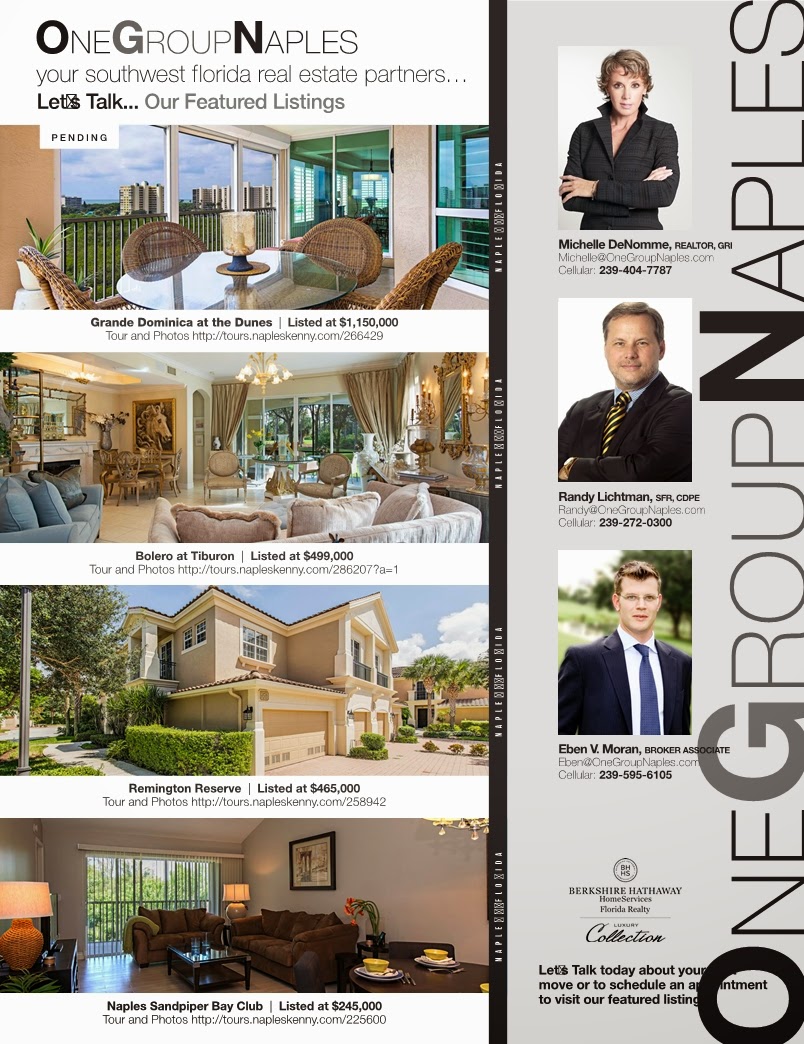 Posted by Michelle DeNomme, Your South West Florida Realtor at 12:44 PM No comments:

Let's Talk... Naples New Developments together today!
I am your New Development Specialist with over 35 New Developments here in Collier County
to offer you! I can represent you throughout the entire process!
I have outlined some of the key reasons that working together will benefit you below…

Let's Talk today about your next move!
Buying a new home in a New Development is exciting. You get to build your dream from the ground up, choosing your lot, your model, interior finishes and upgrades. But like any home purchase, buying new construction is serious business, an expensive transaction with many financial implications. That’s why it’s a good idea to contact me to represent you to navigate through the entire process...
Here’s why:
Builder sales reps represent the builder.
Often builders have their own agents on site to answer questions, assist people who walk in, and ultimately help with a purchase. Builder reps provide a valuable service: They can explain differences between models and floor plans and share information about financing options, upgrades and specials. But it’s important to remember that builder reps represent the builder, as they are contractually obligated to do. “Realtors® are trusted resources for real estate information and can help home buyers navigate the increasingly complex home-buying process,” said National Association of Realtors® President Gary Thomas. “The buyer agency agreement ensures the buyer that his or her Realtor® will represent the interests of the buyer alone and not the seller.”
Fiduciary responsibility…
One of the most important considerations for any buyer is fiduciary responsibility. When you retain the services of a Realtor®, their responsibility is to you. That means you have an expert who is looking out for your best financial interests, an expert who’s contractually obligated to protect you. A Realtor® can help you navigate the new-construction contract; help you understand how specific clauses, riders and upgrade options affect you; and make sure you know what you need to before you sign on the dotted line.
Negotiating a better deal…
Finding the right model and picking your upgrades is the fun part. Once you’re ready to sign the contract, a Realtor® can work on your behalf to negotiate the terms, from upgrade options to financing and closing costs. In addition, a Realtor® can present other options for financing or might be able to work with the builder’s lender directly to get you a better rate for your mortgage.
Shepherding your new home to closing…
Signing a contract with a builder is just the beginning. You must also line up financing, work with title companies and attend numerous inspections throughout the construction. A Realtor® can manage that process and can accompany you on inspections to ensure you’re not missing anything at each construction milestone.
Let me guide you throughout the process, contact me today before you decide to visit any New Home Site Development/Community so that I can provide you with all you need to know in making an informed decision!

Posted by Michelle DeNomme, Your South West Florida Realtor at 12:06 PM No comments:


Let's Talk... Bolero at Tiburon!!! This “Valencia” Model Floor Plan with the most Breathtaking Views in all of “Bolero.” Once you enter the Private Gated Community of Bolero you will be Enchanted by an Enclave of 20 low rise buildings each with three floors. Enter through the Exquisite,  First Floor Entrance and step into over 1700 Square Feet of Living Area, plus a Fantastic  Screened Lanai. This Condominium features a Magnificently Designed Floor Plan with a Living Room which leads to your Private Lanai Area.  While living and playing you will enjoy basking in another Glorious Day with Views of the Naturally Preserved Surroundings, such as the Tiburon Greg Norman Designed Golf Course with its Tranquil Water Features.  This home features Two Bedrooms with Den, Two full Bathrooms and a Gourmet Kitchen.  Celebrate entertaining with your family and friends in your comfortable and cozy setting. Come and take a look at this Pristine First Floor home that is highly sought after in the enclave that only Bolero has to offer! Make this home your next Home Sweet Home! Let's Talk today about your Buyer Incentive!

Posted by Michelle DeNomme, Your South West Florida Realtor at 11:08 AM No comments: