Let's Talk Hot Off The Press...

For the NABOR October 2021 detailed report 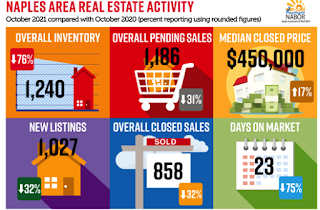 Posted by Michelle DeNomme, Your South West Florida Realtor at 1:37 PM No comments:

Sneak Peek from Naples Area Board of REALTORS

Check out the news on my BLOG... 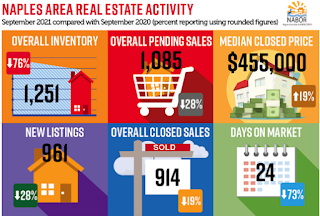 Posted by Michelle DeNomme, Your South West Florida Realtor at 1:09 PM No comments:

On November 1st, 2021, Collier County’s beach renourishment truck haul will begin. This year’s project will start with Naples Beach, spreading about 84,000 tons of sand from just south of Lowdermilk Park to just north of Naples Pier. Trucks will travel (click on the haul route map to enlarge) from Stewart Mine in Immokalee to 3rd Avenue North beach access point; on average about 200 trucks per day will make the trip. Trucks will make their way from the mine to I-75 and then exit at Golden Gate Parkway. From there, they will head west to US41, then south to Banyan Boulevard, and head west to Gulf Shore Boulevard. The trucks will then travel south to 3rd Avenue North and then unload on the beach. The outbound route is north on Gulf Shore Boulevard, to east on Mooring Line Drive, similar to the outbound route used last year. From Mooring Line Drive / US41, trucks will head south to Golden Gate Parkway and back to I-75. If the weather cooperates, the expected duration of hauling for the Naples Beach section is approximately three weeks with the anticipation to finish the hauling by Thanksgiving. Collier County and the City of Naples understand the concerns of the residents affected and always insist that safety is our absolute priority. Collier County will be working with the Naples Police Department to ensure adherence to speed limits and the haul route.

Posted by Michelle DeNomme, Your South West Florida Realtor at 1:03 PM No comments:

The daily operation of the new Food & Thought 2 all-organic restaurant in North Naples will be led by General Manager Dan Kniola and Executive Sous Chef Raena Hobson. Targeted to open in November or December, the new restaurant will replace Founders Market & Bistro, which permanently closed this spring at 7941 Airport-Pulling Road. Kniola recently left his role as executive chef at Players Club & Spa in Lely Resort after working for Stock Development for 21 years. He previously was a chef for the Ritz-Carlton hotel company and the Grand Floridian resort at Walt Disney World. Hobson most recently was executive chef at Meridian Café in Naples for more than three years and previously was chef at Three60 Market in East Naples, Naples Grande Golf Club and The Club at Grandezza in Estero. The restaurant will have a large courtyard and an adjacent organic market. The venue is owned by Alfie Oakes of Naples-based Oakes Farms, Randy Johns of Phoenix Associates construction company and Anthony High of Marjon Specialty Foods.

Posted by Michelle DeNomme, Your South West Florida Realtor at 4:34 AM No comments:

Tech billionaire Michael S. Dell’s MSD Partners purchased the exclusive Hamilton Harbor Yacht Club in Naples for $16.6 million on Sept. 27. The seller was Collier Enterprises Inc., a Naples-based real estate investment and development firm that also sold its Old Collier Golf Club last week to Hoffmann Family of Companies for $45.3 million. Dell is the founder, chairman and CEO of Dell Technologies computer IT company and also the money behind The Athens Group’s redevelopment of the Naples Beach Hotel & Golf Club, which permanently closed in May and is proposed to be the future home of a Four Seasons resort. Dell’s MSD Partners and MSD Capital control a luxury portfolio that includes the Boca Raton Resort & Club purchased two years ago. MSD, which has offices in New York, California and West Palm Beach, is a private investment firm established in 1998 to exclusively manage the assets of Michael Dell and his family. Hamilton Harbor Yacht Club is tucked away in a protected harbor off Naples Bay on 28.38 acres at the southern tip of the city of Naples near Naples Botanical Garden, Rookery Bay National Estuarine Research Reserve, Gordon Pass and Keewaydin Island. Developed by Collier Enterprises in 2008, the private club has 25 floating wet slips and an advanced storage center that can hold as many as 325 boats. Its Old Florida-style clubhouse includes a full-service restaurant and bar. For the full story, click here.

Posted by Michelle DeNomme, Your South West Florida Realtor at 4:09 AM No comments: South Seas Island Resort, which is on the northern tip of Captiva Island, has sold for $50.38 million.

The Timbers Company, Wheelock Street Capital and the Ronto Group have combined forces for the purchase of the iconic property that has been in place since 1946.

Blackstone had purchased it in February 2006 for $23.4 million. The value has more than doubled in 15 years, from just before the Great Recession began and the real estate bubble burst.

South Seas sits on 2.5 miles of white-sand beaches. The 330-acre resort and wildlife preserve and estuary comprise about one-third of the northern tip of the 6-mile-long island.

“We see this as a phenomenal piece of real estate,” said Greg Spencer, CEO of Timbers Company, which is based in Winter Haven. He is a former Air Force logistics officer who served for five years. After the Air Force, he earned a master’s degree in real estate development at Colombia University in New York, then joined Timbers, working his way up to CEO.

“These things don’t come on the market that often,” Spencer said of South Seas. “We saw this as iconic, old-Florida charm. It’s a great opportunity to take it and enhance everything.”

The property has 434 units. They range from a hotel and guestrooms and suites, one- to three-bedroom condos, a private home, cottages to small home rentals.

All have balconies and lanais with views of the waterfront.

There are 20 swimming pools, a pool complex, beachfront golf, tennis, a full-service spa and restaurants.

Wheelock and Ronto have developed more than 700 condominium units on the west coast of Florida.

On Monday, efforts will begin to spruce up the property with painting and landscaping.

Over the next six months, the remaining workforce that has been living on the property will be relocated to off-island housing, Spencer said.

The workforce also projects to grow, he said, by about 20% from the current number of about 220 employees.

“There were 19 different groups that came in,” said South Seas general manager Shawn Farrell, who has been on the job for 11 years and will be retained. “Everybody had different ideas about what South Seas should be. When Greg came in, it just connected.”

Timbers owns 16 resorts around the world and also owns master-planned communities in the Virgin Islands, Italy, Hawaii and now Captiva.

Wheelock owns Chateau Elan Winery and Resort, just outside of Atlanta, and the 265-room, all-suite, AAA Four Diamond Hotel Contessa on the Riverwalk in San Antonio.

The new ownership group eventually will tear down and redevelop the existing workforce housing.

“There are 140 units, and a third of them have been condemned for 10 years at least,” Spencer said. “We’re providing six months of assistance for the transition to off-island housing.

“This is about the people. I wanted to come down here and meet the team. I want to make sure that this is one of the top resorts in the United States.”

Posted by Michelle DeNomme, Your South West Florida Realtor at 6:02 AM No comments:

Ranked: Here are the most expensive ZIP codes across the U.S.

Home values are surging seemingly everywhere — but, more than a year after the Covid-19 pandemic hit home, what are the most expensive ZIP codes in America?

The Business Journals analyzed more than 30,000 ZIP codes, using Zillow Group Inc. data, to find the 25 most-expensive ZIP codes by median home value. While the ranking strictly looks at median home value as of July 31, 2021, we've included how home values have changed for those ZIP codes in the past six months, one year and five years.

New York dominates the list, with the greatest number of ZIP codes from a single metropolitan area making the list. Unsurprisingly, several ZIP codes in California also made the ranking.

Notably, though, several New York ZIP codes containing some of the highest home values in the U.S. also have seen double-digit home-value losses in the past few years. A ZIP code that includes the West Village and Greenwich Village, for example, has seen double-digit declines since 2016. So has a ZIP code on the Upper East Side.

Outside of New York, though, several tony ZIP codes have seen moderate to big gains in home values in the past five years, including the Los Angeles metro area and the Bay Area.

Looking at the past year, Columbus also ranked among the areas with the fastest growth in home values, specifically ZIP code 43222, which saw a 65% increase in one year. Topping the list for one-year home-value growth is 18254, which is in Tresckow, Pennsylvania, in the eastern part of the state. That area has seen 66% home-value gains in the past year.

The data underscores broader population and migration patterns we've observed for several years, even before the pandemic: The most expensive places to live in the U.S. are seeing flat, reduced or modest growth in home values, likely owing in part to people moving out of those places, while more affordable places are seeing the biggest gains as more people flock to those ZIP codes.

Posted by Michelle DeNomme, Your South West Florida Realtor at 5:56 AM No comments: