Posted by Michelle DeNomme, Your South West Florida Realtor at 11:45 AM No comments:

Posted by Michelle DeNomme, Your South West Florida Realtor at 11:39 AM No comments:


Posted by Michelle DeNomme, Your South West Florida Realtor at 2:36 PM No comments: 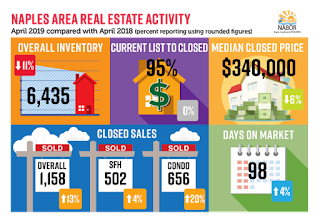 Naples, Fla. (May 24, 2019) - Closed sales during April in the Naples housing market increased 12.8 percent to 1,158 properties in April 2019 from 1,027 properties in April 2018. Broker analysts reviewing the April 2019 Market Report released by the Naples Area Board of REALTORS® (NABOR®), which tracks home listings and sales within Collier County (excluding Marco Island), reported that April was a solid month with strong sales activity in both the single-family and condominium markets.

"I believe we have reason to be optimistic going into the summer," said Bill Coffey, Broker Manager of Amerivest Realty Naples who added, "The report showed overall sales were up 17 percent in April over March, and March's sales were higher than February."
According to Kathy Zorn, broker/owner, Better Homes and Gardens Real Estate Pristine, who analyzed April's Market Report and showing activity provided by ShowingTime, a REALTOR® resource that tracks agent listing appointments with potential buyers, it took an average of 15 showings for a property to secure a contract in April.
"The uptick in showings during the last few months are a positive indicator of continued buyer interest in our area," said Zorn. And while April's overall median closed price decreased 5.6 percent to $340,000 in April 2019 from $360,000 in April 2018, April 2019's median closed price was higher than both January and February's median closed prices.
The Report also showed nearly 1,000 properties went from active to either terminated, expired, or withdrawn in the Southwest Florida MLS during April, which directly impacted April's ending inventory level as seen in an 11.1 percent decrease to 6,435 properties in April 2019 from 7,239 properties in April 2018. But Zorn also pointed out that April saw the number of new condominium listings increase by 9.2 percent; whereas there was a decrease of 3.2 percent for new listings in the single-family homes market.
"Despite old-fashioned beliefs that our area is predominately seasonal, the last few years of home sales activity after Easter are proof that this is just not the case anymore," said Mike Hughes, Vice President and General Manager for Downing-Frye Realty, Inc.
In agreement, Brenda Fioretti, Managing Broker at Berkshire Hathaway HomeServices Florida Realty, added that "April and May have always been our strongest months for closings historically. But unlike last year, April's Report this year shows signs of a possible new trend: more closed sales for homes on the lower end of the price spectrum versus last year which had more closed sales in higher price points."
The Report supports Fioretti's theory as closed sales of single-family homes in April 2019 increased 4.4 percent, but closed sales of condominiums increased 20.1 percent in April 2019 compared to April 2018 market statistics. Further, the trend toward more sales of lower priced properties Fioretti mentioned is also visible in activity tracked over the last 12 months where there was a 4.3 percent increase or 2,727 closed sales of condominiums in the under $300,000 price category compared to a .8 percent decrease in this same price category for single-family homes (1,037 closed sales). The increase in condominium inventory Zorn mentioned is also a contributing factor to this new trend.
The NABOR® April 2019 Market Reports provide comparisons of single-family home and condominium sales (via the Southwest Florida MLS), price ranges, and geographic segmentation and includes an overall market summary. NABOR® sales statistics are presented in chart format, including these overall (single-family and condominium) findings:

As always if you have any questions about our South West Florida Real Estate Market please feel free to reach out to me by calling 239.404.7787 or by e-mail at Michelle@NaplesHomeSweetHome.com

I hope you have a fantastic week.
Michelle :0)

Email ThisBlogThis!Share to TwitterShare to FacebookShare to Pinterest
Let's Talk Hot Off the Press...

WASHINGTON – June 4, 2019 – The National Flood Insurance Program (NFIP) that millions of people rely on has gotten another temporary extension, as members of Congress renew efforts to work out a long-term proposal.
The NFIP extension through the end of September was tucked into a $19 billion disaster aid package the U.S. House approved in a 354-58 vote Monday evening. It now heads to President Donald Trump, who is expected to sign it.
This is the 12th temporary extension in two years. U.S. Sen. Bill Cassidy has led a bipartisan group of senators in calling for a long-term solution, rather than the piecemeal approach Congress has taken since September 2017, when the last major authorization ended.
"This ridiculous process has created significant uncertainty and anxiety for homeowners, renters, and small business owners in our states," the senators wrote in a joint letter last month.
House and Senate leaders from both parties have expressed optimism about the long-term talks. U.S. House Minority Whip Steve Scalise, R-Jefferson, said he believes a five-year agreement can be hashed out in the coming months before the program faces its next deadline.
In Cassidy's letter, senators called for a broader overhaul that factors in more accurate risk assessments, affordability components, mitigation funding and other improvements, including addressing "repetitive loss properties" through buyouts, elevations and other flood-proofing measures.
Repetitive loss properties are those for which NFIP has paid at least two claims of more than $1,000 in any 10-year period since 1978. At 7,223 properties, Louisiana has significantly more than any other state with damages totaling $1.22 billion between 1978 and 2015, according to an analysis from the nonpartisan Natural Resource Defense Council.
The program provides flood coverage to more than 5 million policy holders across the country, but it also faces resistance among lawmakers who question its costs and efficiency.
The Government Accountability Office has included the NFIP on its "high risk list" because it hasn't struck a sustainable balance between keeping insurance affordable and maintaining the program's solvency, leading to premium rates that "in many cases do not reflect the full risk of loss and produce insufficient premiums to pay for claims."
The NFIP had to borrow money from the Treasury to help cover major disasters, after the program became mired in debt following Hurricane Katrina in 2005.
The disaster aid package, which includes funding for more than three-dozen states that have experienced floods, wildfires, hurricanes and other disasters in the past year, was blocked from passing three times while Congress was on a week-long recess. Three Republicans who acted to block the legislation said they wanted a recorded voice vote in the Democrat-controlled chamber.


This Is the Best Place to Retire in Florida?

We crunched the numbers so you don’t have to.
BY MARISA SPYKER / COASTALLIVING.COM  JUNE 06, 2018
Travel & Leisure
The charming Gulf Coast town on the southwest corner of Florida has long been a paradise for... read on to find out just where in Florida!?
Michelle J. DeNomme‏ @DeNommeRealtor

Posted by Michelle DeNomme, Your South West Florida Realtor at 5:07 AM No comments: