Let's Talk... Hot Off The Press

Pending home sales have dropped for

NAR says that sales are slowing because of high pricing A house for sale and National Association of
Realtors Chief Economist Lawrence Yun
(Credit: Pixabay)
Pending sales for existing homes nationwide dropped by 0.7 percent in between July
and June, and have now fallen for seven straight months on an annual basis.
The National Association of Realtors’ study of those sales suggests that the slowdown
is because of high pricing. Pending sales in July were down 2.3 percent year over year.
The organization’s analysis is based on contracts signed for existing single-family
homes, condos and co-ops, also making it an indicator of what closed sales could
look like in a month or two.
The western U.S. saw the biggest year-over-year dip in pending sales, dropping
by 5.8 percent. Sales in the southern U.S., which has been one of the stronger
egions in recent years, dipped by 0.9 percent.
NAR Chief Economist Lawrence Yun said those declines “weighed down” the
overall national numbers. He said the latest numbers are a reflection of overheated
markets, pointing to the western U.S. as the prime example.
Years of inadequate supply and strong job growth “have finally driven up home prices
to a point where an increasing number of prospective buyers are unable to afford it,” Yun said.
The latest S&P CoreLogic Case-Shiller Index suggested that pricing may
be hitting a ceiling in many major U.S. metros. Home prices in 20 cities part of
the index rose at their slowest pace since 2016. Climbing mortgage rates are also
likely affecting the pace of price growth and sales.
Yun added that if new home construction picked up, prices would likely come
down to a point that first-time buyers could afford again. First-time buyers spent
around 23 percent of their income on a typical starter home in the second quarter, up 2
percent from the first quarter.
He predicted sales of existing homes this year would drop by 1 percent to 5.46
million and pricing would increase by around 5 percent.Tags: home prices, home sales,
National, Residential Real Estate
https://therealdeal.com/la/2018/08/29/pending-home-sales-have-dropped-for-seven-straight-months/?utm_source=The+Real+Deal+E-Lerts&utm_campaign=0d4466837d-SF_WEEKEND_12_3_164_3_2016_COPY_01&utm_medium=email&utm_term=0_6e806bb87a-0d4466837d-385823109#new_tab
Posted by Michelle DeNomme, Your South West Florida Realtor at 3:49 AM No comments: 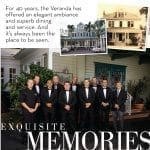 Email ThisBlogThis!Share to TwitterShare to FacebookShare to Pinterest
Let's Talk... Hot off the Sand!


LINES in the SAND

A dispute between beachfront property owners and the public in Florida’s Panhandle and a new state rule designed to mediate that dispute has called into question the future of one of the Sunshine State’s most precious resources: 825 miles of sandy beach. 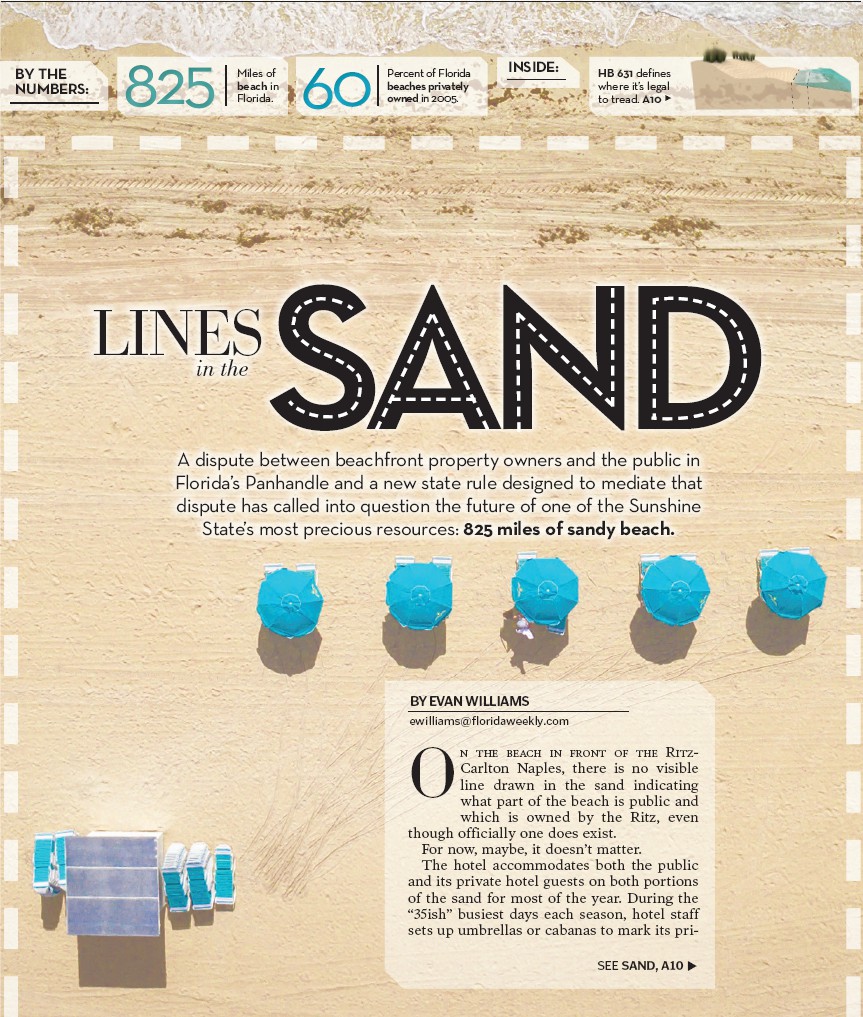 https://naples.floridaweekly.com/articles/lines-in-the-sand/
LINES in the SAND | Naples Florida Weekly ON THE BEACH IN FRONT OF THE RITZ-Carlton Naples, there is no visible line drawn in the sand indicating what part of the beach is public and whi... naples.floridaweekly.com
Posted by Michelle DeNomme, Your South West Florida Realtor at 4:06 AM No comments:

Study: Most millennials need to

COSTA MESA, Calif. – Aug. 24, 2018 – Experian released a study on the borrowing behaviors of millennials, the largest credit population in the United States. The study found that only 39 percent of millennials without a mortgage have a prime or better score, and the majority face higher delinquency rates.
“This data presents good news for younger, thin-file millennials interested in buying a home,” says Michele Raneri vice president analytics and business development at Experian. “We’re seeing that small changes in financial behaviors such as building a history of on-time payments and improved credit practices can help lenders shift from viewing millennials as high-risk to low-risk relatively quickly. Knowing where you stand from a credit perspective is critical to improving or maintaining your financial well-being.”
To better understand the borrowing behaviors of millennials, Experian looked at personal loan trends, credit scores, bankcard behaviors and mortgage trends of 60 million younger adults.
According to a recent study from the National Association of Realtors®, 86 percent of millennials believe that buying a house is a good financial investment – Experian’s research found that only 15 percent have a mortgage today.
In addition, with 61 percent of millennials near prime or worse, many need to improve personal loan and bankcard usage habits to obtain lower rates when they’re ready to secure a mortgage.
“Often, young people start their credit journey with a couple of mistakes first, but in the end, these mistakes create opportunities to learn how to use and build credit responsibly,” says Rod Griffin, director of consumer education and awareness at Experian. “This study presents clear areas of opportunity for millennials as they age and prepare to enter the mortgage market.”

Let's Talk Hot Off the Press... 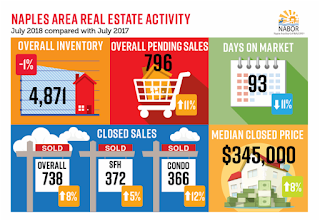 Naples, Fla. (August 24, 2018) - According to the National Association of REALTORS July market report, existing home sales in America decreased for the third straight month as a result of the severe housing shortage that is not releasing its grip on the nation's housing market.
Conversely, homes sales in the Naples area were up 8 percent in July according to the July 2018Market Report released by the Naples Area Board of REALTORS® (NABOR®), which tracks home listings and sales within Collier County (excluding Marco Island). The nation has only a 4.3-month supply of home inventory, while Naples has a healthier 6.25-month supply of inventory.

"The Naples area overall median home price increase in July 2018 seems to be the only statistical category where we match national trends," said Kathy Zorn, broker/owner, Better Homes and Gardens Real Estate Pristine, "Naples saw an 8 percent increase in its overall median closed price in July 2018 compared to July 2017; whereas nationally, median closed prices went up just 4 percent. But median closed prices for properties over $300,000 in the Naples area decreased 2 percent in July 2018 compared to July 2017."
Interestingly, while July's overall inventory fell 1 percent to 4,871 properties from 4,928 properties in July 2017, inventory increased 5 percent in the $300,000 and below price category. In fact, inventory for single-family homes in this price category jumped 21 percent in July to 345 from 286 in July 2017.
"There are 1,154 single family homes and 1,722 condos for sale under $500,000 currently," said Brenda Fioretti, Managing Broker at Berkshire Hathaway HomeServices Florida Realty. "Economists predict home sales in America during 2018 will not be as good as 2017. However, we're seeing the opposite in the Naples area. Granted our sales were hampered by a hurricane in 2017, but there are no signs that interest in buying a home in Naples this year might drop because of temporary climate or environmental phenomena. We have a healthy inventory, an increase in closed sales, price stability and a decrease in the days on the market compared to July 2017."
July also saw a huge 39 percent jump in condominium closings in the Naples Beach area. Closed sales for August look strong too in this segment as pending sales for condominiums in the Naples Beach area increased 55 percent in July 2018 over July 2017!
Overall pending sales in Naples were up 11 percent in July, with only one price segment ($500k-$1M) reporting a decrease compared to July 2017.
"Pending sales for luxury condominiums [$2 million and above] in July were up 150 percent," said Budge Huskey, President, Premier Sotheby's International Realty. "The strength of the luxury market segment for both single family and condos continued into the summer months, a reflection of sustained confidence among the affluent witnessing the longest economic expansion cycle in the nation's history and record corporate earnings."
How buyers are purchasing homes in Naples is very different than the national average home buyer, as well. Cash sales accounted for only 20 percent of home purchases in July nationally. But in Naples, cash sales accounted for 50 percent of all home sales in July.
The NABOR® July 2018 Market Report provides comparisons of single-family home and condominium sales (via the Southwest Florida MLS), price ranges, and geographic segmentation and includes an overall market summary. The NABOR® July 2018 sales statistics are presented in chart format, including these overall (single-family and condominium) findings:

According to Cindy Carroll, SRA, with the real estate appraisal and consultancy firm Carroll & Carroll, Inc., inventory in neighborhoods west of US 41 are beginning to tighten. "I think we can expect some upward price pressure in areas where the inventory supply level is below 4 months, like Pelican Bay."
Carroll also noted that the number of affordable homes in areas like Golden Gate City and South Naples is growing. "In April 2018, Golden Gate City had a 1.3-month supply of inventory; today it's at a 3.7-month supply. While a majority are priced on the high end of the $0-$300,000 price category, it might still provide some new opportunities for first-time homebuyers."
In response to the question of whether home sales will be affected by a longer-than-average red tide occurrence, Huskey responded, "Clearly it's a situation we are all watching closely, yet currently there's no reflection in the pace of home sales. While impossible to ignore if at the beach on a day in which it's more prominent, a block or two east you wouldn't be aware of any issue and inland sales represent the vast majority of all activity in the market."
If you are looking to Buy a New Home or Sell Your Home in Naples, contact me today by e-mail Michelle@NaplesHomeSweetHome.com or by calling 239.404.7787 so that I can provide you with an accurate market comparison so you can determine the right asking Purchase or Listing price.
View July 2018 Market Statistics
I hope you have a fabulous weekend!
Michelle

Posted by Michelle DeNomme, Your South West Florida Realtor at 8:40 AM No comments:

Posted by Michelle DeNomme, Your South West Florida Realtor at 3:55 AM No comments: