Let's Talk Hot Off the Press... Naples Area Real Estate Inventory Outpaced Sales in 2016
Naples, Fla. (January 20, 2017) – Broker analysts who analyzed the Annual, 4th Quarter and December 2016 Market Reports released
by the Naples Area Board of REALTORS® (NABOR®), which tracks home listings and sales within Collier County (excluding Marco Island)
concluded that the local real estate market performed well in 2016 despite several unpredictable market influencers that impacted the housing market
such as the February stock market slump, a low Canadian exchange rate, Brexit and Zika fears, and the presidential election. Brokers agree that factors
appear to be in place for a good market in 2017.
“The 2016 year-end report indicated that we started the year with an inventory shortage but ended at a level that positions us to see
sales begin to catch up in 2017,” said Bill Poteet, owner and broker at Poteet Properties.
Overall inventory increased 34 percent to 5,946 homes in year ending 2016 from 4,426 homes in year ending 2015. The Naples Beach
area experienced the highest number of new listings with 437 homes added to its inventory during 2016. However, and according to the
Report, the Naples Beach area also saw the largest decrease in overall closed sales during 2016 of all other geographic areas reported.
Overall closed sales in this highly desired location decreased 21 percent to 1,525 homes in year ending 2016 from 1,922 homes in year ending 2015.
Closed sales of condominiums in the East Naples area and single family homes in the $500,000 to $1 million price category increased in 2016,
despite overall closed sales decreasing 13 percent to 8,510 homes in year ending 2016 from 9,751 homes in year ending 2015.
According to Coco Waldenmayer, a managing broker at John R. Wood Properties, competition from new home developments in 2016 played
a role resulting in fewer sales of existing homes in 2016 compared to 2015, which was a very strong year. “The report showed the highest number
of closed sales in 2016 occurred in the North Naples area, which is also where a rash of new home development is taking place.”
“With a surge in inventory from new construction, buyers had more options in 2016,” said Adam Vellano, West Coast Sales Manager for BEX Realty Florida.
“Unfortunately, developers and builders of newly constructed homes in Collier County do not fully utilize NABOR®’s MLS [Multiple Listing Service];
and therefore, the Market Report, while useful as a tool to track resale market performance, does not capture or reflect a clear picture of what’s happening
in new construction.”
Of note, the annual Market Report showed that the overall median closed prices for homes above $300,000 did not change during 2016. In fact, homes
in the $500,000 to $1 million price category experienced only a 3 percent decrease in their overall median closed price to $650,000 in year ending 2016
from $667,000 in year ending 2015. Brokers attribute this reduction in median closed price, and the 2 percent decrease in overall median closed price for
the $1 million to $2 million price category in 2016, to better informed and motivated sellers.
The NABOR® Annual 2016 Market Report provides comparisons of single-family home and condominium sales
(via the Southwest Florida MLS), price ranges, and geographic segmentation and includes an overall market summary.
The NABOR® Annual 2016 sales statistics are presented in chart format, including these overall (single-family and condominium) findings:
As noted by Jeff Jones, Managing Broker at the Naples-Park Shore office of Coldwell Banker®, the Report showed a
14 percent increase in days on market for year ending 2016. He went on to explain that “the number of days on market
is influenced by median closed prices and closed sales activity. By the last month of the year, the overall days on market
decreased 8 percent [to 88 days in December 2016 from 96 days in December 2015], and we didn’t see a rise in median
closed prices during December either. I think this shows us that sellers are beginning to heed their REALTOR’s recommendation
to list their property at a reasonable market price initially rather than to start high and then go through two or three price reductions.
Priced correctly, properties will move in a reasonable length of time.”
As pointed out by Tom Bringardner, Jr., President/CEO of Premier Commercial, the first wave of Baby Boomers to hit 70 years
old will take place in 2017, which may result in increased home sales in the area as these potential buyers will be required to take
mandatory distributions from their retirement accounts and may begin looking at a second home in a more hospitable climate as
a safe investment.

I have provided the full details report... Click Here.

As the Brokers stated that Market Reports in 2016 predicted that inventory would rise and they believe our inventory of existing
homes will continue to increase in 2017.
My knowledge of our local Real Estate Market can help you when pricing your home to sell by pricing your property correctly and when you are identifying a property to negotiate you will be able to see just how important it is to know the entire local Real Estate market trends that I will be able to provide to you.
As always I look forward to any and all question you may have regarding our Real Estate market and look forward to hearing from you by e-mail at Michelle@NaplesHomeSweetHome.com or by calling 239.404.7787.

I hope you have a fantastic weekend.

The Naples Area Board of REALTORS® (NABOR®) is an established organization (Chartered in 1949) whose members have a positive and progressive impact on the Naples Community. NABOR® is a local board of REALTORS® and real estate professionals with a legacy of nearly 60 years serving 6,000 plus members. NABOR® is a member of the Florida Realtors and the National Association of REALTORS®, which is the largest association in the United States with more than 1.3 million members and over 1,400 local board of REALTORS® nationwide. NABOR® is structured to provide programs and services to its membership through various committees and the NABOR® Board of Directors, all of whose members are non-paid volunteers.
The term REALTOR® is a registered collective membership mark which identifies a real estate professional who is a member of the National Association of REALTORS® and who subscribe to its strict Code of Ethics.

Posted by Michelle DeNomme, Your South West Florida Realtor at 9:23 AM No comments:

Art Fest Naples this weekend
at Fleischmann Park
The 20th annual Art Fest Naples
>> What: A juried show with 140 artists in all mediums
>> When: 10 a.m. to 4 p.m. Saturday and Sunday, Jan. 21-22
>> Where: Fleischmann Park
>> Admission: Free, but donations welcome to The Special Needs Children Fund
>> Info: 634-2337 or www.artfestnaples.com

Posted by Michelle DeNomme, Your South West Florida Realtor at 3:53 AM No comments:


Posted by Michelle DeNomme, Your South West Florida Realtor at 12:27 PM No comments:

Let's Talk... It's that Time again...
Filing for the exemption can be made up to March 1, though proof
of residency must be dated before January 1, 2017 in
order to receive the tax break for the upcoming year...

The Homestead Exemption applies to those who make a Florida
Property their permanent/primary residence.
Posted by Michelle DeNomme, Your South West Florida Realtor at 8:57 AM No comments: 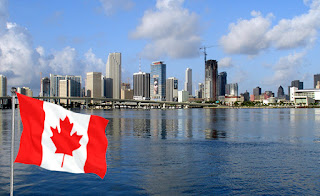 Buyers from the country up north dominated the Miami Association of Realtors’ October list of foreign countries searching for property in Miami for the second time since November 2013.
Canada took the lead from Colombia, a dominant group of buyers of South Florida real estate. (Colombia led the association’s ranking from December 2015 to September 2016.) Brazil, also once the top country looking to buy in Miami, fell to No. 5 on the list.
India, meanwhile, jumped from the sixth spot to No. 3. According to the National Association of Realtors, India is the third largest foreign buyer of real estate in the entire U.S., spending $6.1 billion on properties in 2016. And Chinese buyers outspent them all, dropping $27.3 billion on U.S. real estate in 2016. Canada was No. 2 with $8.9 billion.
Canadian buyers are also the fourth most active country picking up South Florida real estate. Seven percent of all foreign sales in South Florida came from Canada in 2015, according to the report. Buyers from Canada also paid cash more than any other country at 86 percent. Argentina, Brazil and Venezuela followed Canada in cash sales.
Here are the top 10 countries visiting Miamire.com, the Realtors’ association website in October 2016:
– Katherine Kallergis
Tags: foreign buyers, miami association of realtors
Posted by Michelle DeNomme, Your South West Florida Realtor at 4:45 AM No comments: