Let's Talk Hot Off The Press...
Posted by Michelle DeNomme, Your South West Florida Realtor at 9:35 AM No comments: 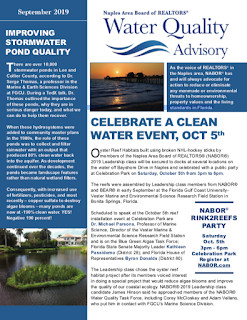 Posted by Michelle DeNomme, Your South West Florida Realtor at 8:11 AM No comments:

Posted by Michelle DeNomme, Your South West Florida Realtor at 2:22 PM No comments:

St. Andrews Square, breakfast, lunch and dinner. Just mention
you are participating in the Dine Out for ENEE Awards Fundraiser.
Please nominate and recognize outstanding individuals working in the education field who are dedicated to the success of the students at the above schools. Nominations will be accepted now through November 15th, 2019. Please visit www.ENEEAwards.org and click on Nominations at the top of the page. The Nomination Form can be submitted online, e- mailed to eneeawards@gmail.com, or mailed directly to 8595 Collier Blvd., Suite 107-109 Naples, FL 34114. Teachers in Title One Schools rarely receive compensation for the extra hard work they have performed because those perks go to A-schools. These are wonderful, caring schools, but they have a more difficult challenge.
the size of the existing terminal, with the balance paid by local airport and county taxes. The second project will raze the old terminal building, which will free up space for a larger apron. The cost is approximately $4 million, with 90% paid by the FAA. A third project, paid by a private developer: Marco Hangars LLC, is building new hangar facilities on 117,000 sq. ft. of space with 11 totalhangars. When it’s complete there will be abrand new, much larger airport terminal, a larger apron, more hangers, and nicer landscaping. Our little airport has served us well for many years, as has our AirportDirector Justin Lobb, and it’s getting betterall the time. When I worked for the airline here in town (PBA) we would fly charters for the Marco Marriott into the Marco Island Airport! There are a lot of construction vehicles in that area right now, but whenyou get a chance and you’re not wanderingaround during their work hours, go take a peek, or better yet, call Justin and schedule a speaking engagement for your HOA ordevelopment or club. He’s a great speaker,and the news is terrific! By the way, this does NOT mean they will be bringing in larger aircraft or jets. The runway cannot get any bigger and environmental concernskeep it contained. For those who don’tknow, Marco Airport has a unique feature –a nest of American Crocodiles, and Burmese pythons have been caught nearby. We all hope they get rid of those pythons! They are not a unique feature, and not wanted.

The Marco Island Airport, which is located on Mainsail Drive in East Naples is going through major upgrades. A $13 million dollar upgrade to the airport facility and I mean MAJOR! The FDOT will be paying 80% of the cost (or $9.4 million) for the new airport terminal, which will be over 16,000 sq. ft., more than double
For those arriving early, welcome back! Hopefully your summer was everything you hoped for. On Sept. 12th, as I was starting to write this newsletter, I passed a Car Carrier on Davis Blvd. unloading thecars on board. It’s pretty early, but this isthe beginning of our winter residents coming back to our little paradise. The agencies, schools, law enforcement and not-for-profits are always thrilled as they see them arrive because they look at themas their “volunteer workforce” coming home! Right now it’s easy to get into therestaurants and grocery stores, etc. That will change soon, so enjoy it while you can. I was astounded when Eurasia on US 41E atthe entrance to “old” Lely opened. I went there the first night, figuring they’ll needour local support, but boy was I wrong! It was booming with business on their first day back! Twice more I went, but then had to make a reservation because they werevery, very busy! That’s what you get whenthe food is outstanding, the service is friendly and professional, the prices are right, and the owners are hands-on owners! Of course, I run into Marco people there all
the time. I love that Marco comes to East Naples, and East Naples goes to Marco! We support one another, and that makes life better.

The East Naples Civic Association will be holding their regular monthly luncheon on this Thursday September 19th at 11:30 AM atThe Player’s Club in Lely Resort. RSVP’s areneeded by today (September 16th). Please call 434-1967 and leave your name and number of people attending with the answering service. Our speaker will be yours truly, a 45-year resident of East Naples, and a long standing member of ENCA. The Civic Association was founded in 1950 and it is the oldest Civic Association in Collier County. I will be talking about how East Naples became the County Seat, and accomplishments through the years to help bring the community into a better place. We encourage people who attend and have lived here and participated in Improving the area to offer comments as the meeting progresses.

Donna’s Tidbits
How about Sue Orshell, who moved here in 1960! She can probably tell us about Hurricane Donna. We even have original press clippings and entire newspapers donated by Lila Zuck for our information. You will love seeing these newspapers but please be gentle. They areover 40 years old and we’d like to keep themin good condition. There were many folks who have helped to make our community better through the years. I truly hope they can attend and tell us what they have done or what they remember. Hopefully it will become a trip down memory lane. Tom Cannon, make sure to tell us when you owned a Dairy Queen in the shopping center, and John Hooley, please tell us what part you played in the upgrade of the parks and streets, and Lila Zuck, if you see this, PLEASE come and let us see you amongst us! Maybe even say a few words???

This week I am taking a tour of our median landscaping issues on the roads in this area: US 41 and Collier Boulevard all the way to Jolley Bridge, Rattlesnake Hammock Rd., David Boulevard from County Barn Road to Santa Barbara, and Airport Road to Golden Gate Parkway. We are looking at the condition of the planting bed and the plants that sit inside, what works and what doesn’t.It should be very educational.

Collier County invites you to discuss the arts and cultural and creative opportunities for all residents in our community. An Arts and Culture Community Forum will be held on Wednesday, September 18th from 5:30 pm to 7pm at the Government Complex in the Commissioner Boardroom located at 3299 Tamiami Trail East. There are two other forums at different locations: Tuesday September 17th 5:30-7:30 at the Collier County Public Library HQ at 2385 Orange Blossom Drive and Wednesday September 18th 5-7pm at the Naples Art Association –585 Park Street in the City of Naples.
We have many accomplished artists within the arts world in our region, as well as hopeful artists. The Arts have been a major force in our community for many years, but now the County wants to hear from you to find out what is most interesting to you and begin to work on a Strategic Plan for the future. Aside from the County, sponsors include the United Arts Council, Community Foundation and Artis-Naples. It’s soimportant when an organization reaches out to the people they hope to serve and ASK them what they want, what do they prefer, and what do they hope to accomplish! So happy to hear Collier County is reaching out to everyone.

I know it seems every time we turn around there is another storage unit being built, so I asked the County Manager how many are already built along the East Trail, how many are being built right now, and how many are approved and waiting to be built. Of course, there are others as well along Rattlesnake Hammock, Davis Boulevard and 951.

The staff came back to the manager saying we have five already built, one that is being built and four that are proposed. We have three developer commissioners that are fine with them, but a couple of us wonder what will happen to an area oversaturated with affordable housing, gas stations, car washes, and three-story storage units. I’ve asked tolimit amounts of these items so that a community can have land available to build things a local community needs like barber shops, shoe stores, dress shops, retail and restaurants, but no one will vote with me to bring a better balance to a community, no matter whose community it is! Look at what can happen to any community when you build too much of one thing, but the othercommissioners don’t agree, with the housing – it’s a 4-1 vote, and the others it’s a 3-2vote. I believe it’s our responsibility to builda community for all, to accommodate the needs of the residents who live in that area. Am I old fashioned?

We have a real need for soccer fields in the East Naples area. We have lots and LOTS of kids who love to play soccer, and it gives them an opportunity to learn good sportsmanship, gain friendships, become a family support system, and so on. I won’t tellyou the response I got, but it was no, but said in other words. We have one soccer field in East Naples Community Park and two at Eagle Lakes. One can be used year-round and the other is closed in the summer while the kids are out of school. I’d love it if the school system would allow us to conduct sports in their playgrounds. It would help the community so much. Would you like to take a little tour to compare our parks withthe parks in the other parts of town? I’dlove to conduct that tour, or you can goyourself if you’d like. Make sure to look atthe facilities where the little children can play inside, where they have classes, and where the kids can get in out of the lightning storms or out of the tremendous heat of thesummer. You’ll find it interesting, to say theleast.
Commissioner Fiala’s Contact Information:
By Mail:
COMMISSIONER DONNA FIALA 3299 TAMIAMI TRAIL EAST #303 NAPLES, FL 34112
By Phone: (239) 252-8601
By Email: Donna.Fiala@CollierCountyFL.Gov
To subscribe, unsubscribe or view previous editions, please visit http://DonnasTidbits.com
Posted by Michelle DeNomme, Your South West Florida Realtor at 1:52 PM No comments: