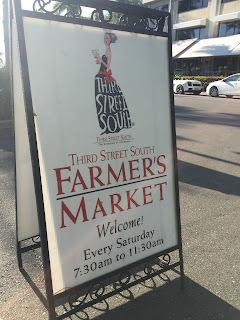 I really need your help today...

On October 5th City Council will decide if the 3rd Street Farmers Market can be held on Third Street South as it has been for the last several years. All Because there were two complaints the vote was postponed. The market cannot be safely held in any other location during season because of it's popularity with residents and visitors who attend in very large numbers.

If you want to keep the 3rd Street Farmers Market on 3rd Street Please let Council know right away!!!

Thanks so much!
Michelle
Posted by Michelle DeNomme, Your South West Florida Realtor at 11:42 AM No comments:

The nation’s second largest homebuilder is acquiring WCI Communities in a merger valued at $643 million.
Miami-based Lennar Corp. will acquire Bonita Springs-based WCI into a newly formed Lennar subsidiary, the company announced on Thursday. Lennar will pay $23.50 per WCI share, which marks a 37 percent premium over WCI’s closing stock price on Wednesday.
The agreement includes a 35-day ‘go-shop’ provision that will allow WCI to seek out potentially superior proposals to maximize value for WCI stockholders, WCI said in a separate announcement.
For the last fiscal year ending on June 30, WCI completed 1,118 homes with an average price of $444,000, and has a portfolio of 14,200 home sites located in Florida’s top coastal markets, the company said.
Home prices have continued to rise following the 2007 housing crisis nationwide and in Florida.
Lennar CEO Stuart Miller said in a statement that WCI’s land portfolio will allow the home builder to “capture more of the move-up market.”
Lennar was ranked the second biggest homebuilder in the country according to the 2016 Builder 100 list. D.R. Horton came in at No. 1. WCI was No. 49, according to the list.
WCI’s stockholders have to approve the vote likely in December or January. Both of the company’s boards already approved the deal. – Katherine Kallergis
Tags: lennar, stuart miller, wci communities
Posted by Michelle DeNomme, Your South West Florida Realtor at 3:25 AM No comments:


Not enough construction in most

WASHINGTON – Sept. 20, 2016 – In 80 percent of measured U.S. metro areas, the number of new homes under construction falls short of demand based on the number of new jobs, according to a study conducted by the National Association of Realtors® (NAR).
In Florida, Miami ranked in the top 10 for large metro areas that need more homes built. At the other end of the spectrum, however, the Pensacola-Ferry Pass-Brent area of the handle is close to a balance between demand and construction. Overall, the 18 Florida metro areas included in NAR's study fell across a broad spectrum somewhere in the middle.
NAR's study looked at new home construction relative to job gains over a three-year period (2013-2015) in 171 metropolitan statistical areas (MSAs) throughout the U.S. According to NAR, "single-family construction is startlingly underperforming in most of the U.S."
"Inadequate single-family home construction since the Great Recession has had a detrimental impact on the housing market by accelerating price growth and making it very difficult for prospective buyers to find an affordable home – especially young adults," says Lawrence Yun, NAR chief economist. "Without the expected pick-up in building as job gains rose in recent years, new and existing inventory has shrunk, prices have shot up and affordability has eroded despite mortgage rates at or near historic lows."
For the study, NAR analyzed employment growth in relation to single-family housing starts. Historically, the average ratio for the annual change in total jobs to permits is 1.6 for single-family homes, but 80 percent of measured markets had a ratio above 1.6, which indicates inadequate new construction. Overall, the average ratio for areas examined was 3.4.
In Florida, only the Pensacola area was in balance with a ratio of 1.6, and no state metro area had more construction than needed.
Using each metro area's jobs-to-permits ratio, NAR then calculated the amount of permits needed in each metro area to balance the ratio back to its historical average of 1.6. The higher the number of permits required, the more severe the shortage and the higher the ratio.
While Trenton, N.J. had the highest ratio of 25.1 percent and demand for new construction, larger cities had higher demands for housing. In total number of permits needed to find balance, NAR found the following cities ranked at the top:
Florida metro areas by rank, ratio and total permits needed
7. Miami-Fort Lauderdale-West Palm Beach: 11.4 ratio, 118,937 permits needed
31. Port St. Lucie: 5.7 ratio, 6,012 permits
56. Tampa-St. Petersburg-Clearwater: 4.1 ratio, 39,034 permits
61. North Port-Sarasota-Bradenton: 4.0 ratio, 14,073 permits
63. Orlando-Kissimmee-Sanford: 4.0 ratio, 47,351 permits
65. Cape Coral-Fort Myers: 3.9 ratio, 13,609 permits
71. Gainesville: 3.7 ratio, 2,277 permits
75. Deltona-Daytona Beach-Ormond Beach: 3.5 ratio, 4,487 permits
81. Tallahassee: 3.3 ratio, 2,158 permits
96. Ocala: 2.8 ratio, 1,769 permits
97. Jacksonville: 2.7 ratio, 13,736 permits
113. Punta Gorda, 2.3 ratio, 702 permits
118. Naples-Immokalee-Marco Island: 2.2 ratio, 3,020 permits
122. Sebastian-Vero Beach: 2.1 ratio, 493 permits
124. Lakeland-Winter Haven: 2.0 ratio, 2,142 permits
127. Palm Bah-Melbourne-Titusville: 1.9 ratio, 974 permits
129. Crestview-Fort Walton Beach-Destin: 1.9 ratio, 731 permits
139. Pensacola-Ferry Pass-Brent: 1.6 ratio, 168 permits
According to Yun, most of the metro areas with a big need for increased construction have strong appetites for buying, home-price growth that outpaces incomes and common instances where homes sell very quickly. Their healthy job markets continue to attract an influx of potential homeowners, fueling the need for more housing.
"Although a few small cities with high ratios did not make the national rank for absolute permit shortages, their supply shortages are still meaningful at the local level and could become a bigger issue if job gains hold steady and the current pace of construction remains at its nearly non-existent level," adds Yun.
"The limited number of listings in several markets means that many available homes are receiving multiple offers and going under contract rather quickly," says NAR President Tom Salomone, broker-owner of Real Estate II Inc. in Coral Springs, Fla.
Looking ahead, Yun says there is good news: The ratio in many areas moved downward slightly in 2015 compared to 2014 as builders started to respond to local supply shortages. However, it'll likely be multiple years before inventory rebounds in many of the markets because homebuilders continue to face a plethora of hurdles, including permit delays, higher construction, regulatory and labor costs, difficulty finding skilled workers and the exhausting process many smaller builders go through to obtain financing.
© 2016 Florida Realtors®

Posted by Michelle DeNomme, Your South West Florida Realtor at 9:45 AM No comments:

Let's Talk...
Be sure to check out the full Report in my Last Post below!!!

The Naples Area Board of Realtors also reported a 36% surge in homes listed for sale in August
September 18, 2016 09:30AM

The number of August sales of houses and condos in the Naples area declined 5 percent to 654 from 689 last year.
The Naples Area Board of Realtors also reported that  the area’s pending home sales in August dropped 9 percent to 734 from 811 in August 2015.
The inventory of Naples-area houses and condos listed for sale in August jumped to 4,787 from 3,525 last year, a 36 percent surge, according to the Realtors.
Residences sold in August were listed for sale for an average of 88 days, up from 75 days last year
The median sale price of Naples-area houses sold in August was $320,000, up from $308,000 in August 2015. The median sale price of  condos was $232,000, down from $235,000 in August 2015.
The number of pending sales of houses and condos fell to 734 in August from 811 in August 2015, a 9 percent drop.
Tags: Naples Area Board of Realtors
Posted by Michelle DeNomme, Your South West Florida Realtor at 6:12 AM No comments:

Naples, Fla. (September 16, 2016) - The housing market's momentum continues to remain strong heading into fall. Upon reviewing the August 2016 Market Report released by the Naples Area Board of REALTORS® (NABOR®), which tracks home listings and sales within Collier County (excluding Marco Island), NABOR® broker analysts cited several reasons why buyers and sellers can expect a promising winter season such as the inventory is continuing to increase and the median closed prices are remaining virtually unchanged.

Overall activity of properties in the $2 million and above price category failed to perform as well in August compared to other price categories. However, condominium inventory in this luxury segment of the market increased 84 percent to 81 condominiums in August 2016 from 44 condominiums in August 2015, while its overall median closed price fell 19 percent (year over year) to $2,537,000 in August 2016 from $3,132,000 in August 2015. This behavior of increased inventory and lower prices primes the luxury segment of the market for a season where the number of properties priced right can certainly meet demand.

NABOR® broker analysts suspect some potential buyers of high-end properties may be reluctant to make big financial decisions because of the uncertainty of the economy after the Presidential election. However, as the report indicated, activity in this segment of the market is historically lower than it is during seasonal months. Brokers were quick to point out that this tapering is anticipated during the summer and expect sales in this segment to rise as we move into the next season.

Upon reviewing the report, Steve Barker, Advising Broker for Equity Realty, remarked that buyers looking for homes in the under $300,000 price category found plenty of options in the Naples condominium market. "There were 211 closed sales for condominiums in the $300,000 and below price category in August compared to 93 in all other price categories combined."

Barker continued, "As the reports indicate, sales have been pretty steady over the summer. Overall, there were 627 closed sales in July and 654 in August. Sales in the high end might have been a bit softer this summer compared to last year, but I do not think it is an indication of anything but how buyers behave during a presidential election year."

Mike Hughes, Vice President and General Manager for Downing-Frye Realty, Inc., pointed out that even though overall inventory decreased slightly over the last five months; historically, it's projected to swing upwards starting next month. If prices continue to remain stable as they have over the last year, then Hughes believes that more choices and reasonable prices will make for a good season.

The NABOR® August 2016 Market Report provides comparisons of single-family home and condominium sales (via the Southwest Florida MLS), price ranges, and geographic segmentation and includes an overall market summary. The NABOR® August 2016 sales statistics are presented in chart format, including these overall (single-family and condominium) findings:

Broker analysts have long acknowledged that a small portion of new construction inventory appears in the Southwest Florida MLS data. To confirm such speculation, Wes Kunkle, President and Managing Broker at Kunkle International Realty, performed an independent analysis of the MLS in August and found that, "approximately 20 percent of active listings in select geographic areas of high development were new construction."

If you are weighing the pros and cons of buying or selling a home in the coming months, let me guide you through the process. I can provide you with a market comparison and determine a fair and reasonable listing price. If you are a Buyer I can also identify properties best suited for your needs and negotiate a purchase price that fits your criteria and budget. Discover more by visiting my
web-site at www.NaplesHomeSweetHome.com

I have sent along the full Market Report for your review below. Please feel free to contact me with any questions you may have by contacting me by e-mail at Michelle@NaplesHomeSweetHome.com  or by calling 239.404.7787.
View August 2016 Market Statistics

Posted by Michelle DeNomme, Your South West Florida Realtor at 4:57 AM No comments: