Let's Talk Hot Off The Press... 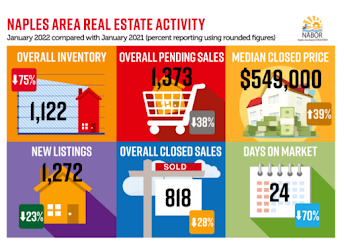 For the full report please contact me by e-mail...

Hot Off The Press... Posted by Michelle DeNomme, Your South West Florida Realtor at 9:24 AM No comments:

The board approved awardiing the contract to Mitchell & Stark Construction Co., which was the low bidder for the project at $34,977,999.18. The project was budgeted at $40 million and the county manager is recommending that the commissioners approve a reserve of $4,207,000 for "funding allowances." Residents of the Waterways development at Immokalee Rd. and Oil Well Rd. raised objections to the widening, but commissioners decided that it was too late to change course.

Barron Collier Cos. Vice President Tom Sansbury said in an interview that crews could be starting work in February. Some independent work has already begun to prepare the area from which fill will be dug. That work will eventually result in the creation of a recreational lake.

Collier County Commissioner Jim Coletta would like to see the middle piece done as quickly as possible, as well as a widening of Camp Keais Rd.

"It's my dream that in the next two or three years people will be able to drive from Naples to Immokalee on four or six-lane roads all the way."

That could be achieved, he said, if a settlement is reached between the state of Florida and  Indian tribes that will determine a contribution to local governments from casino revenues. Mr. Coletta said that such a settlement would enable completion of a number of public works projects in Eastern Collier County without any increase in taxes.

Posted by Michelle DeNomme, Your South West Florida Realtor at 9:08 AM No comments:

Let's Talk Did You Know?

Gulfshore Business readers are craving Portillo’s and White Castle. When asked what chain restaurant they’d want to see come to Southwest Florida in the latest reader poll, voters showed their support for Portillo’s, the Chicago-based fast-casual restaurant specializing in hotdogs, Maxwell Street Polish and Italian Beef. It led the way with 14.4% of the vote. The nearest Portillo’s location is in the Tampa area. White Castle, the regional hamburger chain restaurant that opened its largest store in Orlando last year, followed closely with 13.5% in the open-ended poll. In-N-Out Burger, which primarily operates in California and the Southwest, took home 10.6% of the vote. Texas-based Whataburger (4%), South Korea-based Bonchon Chicken (3.3%), North Carolina-based Bojangles (3%), Texas-based Chuy’s Tex-Mex (2.6%), Louisiana-based Raising Cane’s Chicken Fingers (2.6%), Texas-based Maggiano’s Little Italy (1.9%) and California-based Jack in the Box (1.9%) rounded out the top 10.

Posted by Michelle DeNomme, Your South West Florida Realtor at 6:06 AM No comments: