Naples, Fla. (May 2, 2016) - More than 400 REALTORS® and real estate professionals interested in the economic health of Collier County attended the Naples Area Board of REALTORS® (NABOR®) 2016 Economic Summit, "The New Future: A View from the Top," on Thursday, April 21, 2016 at the Hilton Naples. Three guest speakers provided national, state, and local analysis of recent growth and home sales activity as well as predictions of what to expect in the next 12 months.

Cindy Carroll, SRA, with the real estate appraisal and consultancy firm Carroll & Carroll, Inc., set the tone of the conference when she asserted, "I'm a truth teller!" The audience's familiarity with Carroll's wit brought laughs, but the comment wasn't in vain as her reputation in deciphering predictive patterns in market behavior commands serious respect. Carroll's presentation reflected the First Quarter 2016 Market Report released by the Naples Area Board of REALTORS® (NABOR®), which tracks home listings and sales within Collier County (excluding Marco Island).

"My headline for March would be 'Inventory is up 35 percent over the last 12 months,'" said Carroll, who added that it fell 22 percent between March 2013 and March 2014, but only fell 1 percent between March 2014 and March 2015. "Anytime there is less than 6 months worth of inventory, prices go up. But we're currently at 7.3 months of inventory and the report shows very little movement in price. When we get to 9 months, price increases will most likely really slow down. When we achieve a years worth of inventory - what I consider a balanced market for our area - then we'll start to see pricing mature anywhere between 4 to 8 percent." Carroll added that if the Naples area ever achieves 2 years worth of inventory (something it experienced in 2006) again, then we may begin to see signs of value erosion.

"Agents need to be careful not to draw a blanket conclusion when looking at geographic price increases," said Carroll, who went on to explain that even though the median closed price for condominiums in the South and East Naples area increased 18 percent, five of the six geographic areas reported have a median closed price of $260,000 or less.

Carroll said there appears to also be an exodus to the Ave Maria area as the single-family home median closed price rose 105 percent in that area. "Buyers seeking affordable housing are going East!"

Most neighborhoods west of U.S. 41 exceeded or are nearing a stable market level of one year of inventory.  Meanwhile, a severe shortage of supply persists in the entry-level markets of Golden Gate City and Naples Manor. 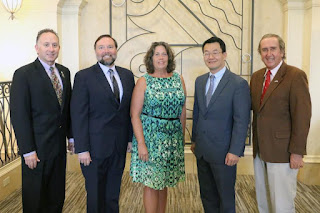 When Mike Timmerman, President and CEO of MJT Realty Economic Advisors, took the stage, he said the speculative home market in neighborhoods nearest U.S. 41 had peaked about a year and a half ago. "There is a 60-month supply of new product in Pine Ridge," he said. "And the Park Shore and Moorings neighborhoods are in a major redevelopment phase too."

One big change Timmerman likes is the new architectural designs being chosen. "Instead of the Mediterranean style home, we are now seeing homes in Neo-classical styles."

Between 2014 and 2015, developers added 3,500 new units around Collier. "There's now an excess supply and we are starting to see communities offer incentives again," said Timmerman. "But it's unclear what effects this election year will have on out-of-state buyers next season."

Timmerman concluded with a few predictions:
• The current pace of redevelopment will create more price reductions,
• High rise development will see a resurgence,
• REALTORS® will see more incentives from community developers, and
• Communities will introduce more multi-family product.
Despite commenting that spending in the upper-end of the market is sensitive to an election cycle, Dr. Lawrence Yun, PhD, Chief Economist National Association of Realtors® (NAR®) said, "The wealthy are looking for great options and this area has them."

"Lifetime wealth is at an all time high," said Yun, who added that middle America's income is falling.
"Corporations are sitting on cash and this lack of infusion into the market is why growth is sluggish."

Yun went on to add that, "Homeownership is near a 50-year low, but home sales are rising nationally. "Young people are struggling to get in the market, but the new tight lending standards are hammering Millennials and, saddled with too much college student loan debt, they can't qualify for home loans."

Vacation home sales surged in 2014 according to Yun, and he sees pending sales holding steady nationally for now. "Mortgage rates will go up moderately," said Yun, adding that the Federal Reserve may increase interest rates twice this year and up to four times in 2017.

In closing, Yun said builders in Florida are not adding product fast enough and this will create a pinch in an already tight rental market, where rates will continue to rise.

As always if you need any additional information please feel free to contact me by e-mail at Michelle@NaplesHomeSweetHome.com or by calling 239.404.7787.
I hope you have a fantastic day.
Michelle

NABOR® is located at 1455 Pine Ridge Road in Naples. For additional information on the Economic Summit, contact Marcia Albert at (239) 597-1666.

The Naples Area Board of REALTORS® (NABOR®) is an established organization (Chartered in 1949) whose members have a positive and progressive impact on the Naples Community. NABOR® is a local board of REALTORS® and real estate professionals with a legacy of nearly 60 years serving 5,000 plus members. NABOR® is a member of the Florida Realtors and the National Association of REALTORS®, which is the largest association in the United States with more than 1.3 million members and over 1,400 local board of REALTORS® nationwide. NABOR® is structured to provide programs and services to its membership through various committees and the NABOR® Board of Directors, all of whose members are non-paid volunteers.

The term REALTOR® is a registered collective membership mark which identifies a real estate professional who is a member of the National Association of REALTORS® and who subscribe to its strict Code of Ethics.

This email was sent to you by Naples Area Board of REALTORS®.

Posted by Michelle DeNomme, Your South West Florida Realtor at 3:49 AM